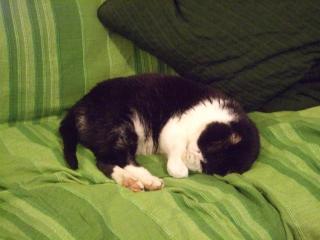 I can't believe it. Four years ago I was starving and homeless and my mouth painful and sore. I had dragged myself to the porch of the house that was feeding me.

It was not a bad life when I first fled from humans because I was a good hunter and a good fighter and I had found my own home in a badger sett at the top of a large garden. Occasionally the humans there would pile old bits of garden rubbish on the roof but then I could race off to other gardens or the fields and hunt mice and pigeons. You get a decent meal from a pigeon.

Then one day, my life began to fall apart. I felt unwell. It hurt when I bit into things and other cats would come and hunt on my territory. I had fought them off many times before as my ragged ears may show, but after some very deep bites, well, things began to change. That was when I got sick. If I hadn't faced my fear of humans and become a cat-flap thief, I would have starved to death in that first year.

What saved me first of all was the grey-white female cat. She'd been a stray like me. Though scared and shy, she had begun to trust an Alpha-Fee who would put food her own cats would not eat, out on the lawn. When the house cats died, the little stray was invited in from her home in the garage. She was the furriest short haired cat I had ever seen and she liked me. We touched noses whenever we met. The Alpha-Fee slept downstairs with her one hot summer so they could be like kitten and mother. I could smell the food that had been left in front of the open door so I would sneak in during the night and bolt it down until the woman woke up and shooed me away.

It was in the spring of the next year, that she caught sight of me in daylight on the front drive. She looked surprised at my dirty coat and sunken cheeks. I began to run away but she put food on the lawn and backed off calling, calling as my fur mother used to do. Two more winters passed and I learned a trick from the grey-white cat. How to push in through a cat-flap. It was a whole new world of food and I went in there every night.

That June day when I dragged myself into the porch, the Alpha-Fee came after me. I just managed to run away. The next night when I went inside. The food was there but I had to crawl along a cold floor to get to it. There was a horrible clang and something dropped down behind me. I turned screaming. I was trapped and so afraid. The Alphas in the house didn't kill me though and neither did the people at the house of animals. I don't know how they did it but they made me sleep. Later, I woke up (but I'll say this quietly) - without bits of me. Half of my teeth had gone and there was something missing underneath my tail. I was a prisoner, but, I was alive and I could eat again.

They had me in a rabbit cage in a big room with wide windows. Humans came in and out but I couldn't run away and the grey white cat came. She seemed to show me they were all ok. Even the Alpha-mal sounded like my friend and though I had the sickness I was sure that they were keeping me. And I. I was keeping them.

I'm in my fourth summer with them now and still alive after I nearly died again. The Alphas took me to the House of Animals where I slept again and woke without pain.

It's been a while now since the Grey-White died. The Alpha-Fee brought her home and we sat together in the autumn sun. When I sniffed around her tail, I knew she'd gone. Sometimes I feel her standing right inside me. The Alpha-Fee looks at me strangely then. I know I'm standing differently and my eyes see things in another way.      And even though Grey-White's no longer here to feed, they seem to want me here and I've discovered a liking for warm laps and fires.

Honestly, it's taken that long after kitten-hood to get back to the life that cats enjoy. And, to the play. I always liked to roll but now my claws get pleasure from the silly things of life, the pretend mice and the little sprinkles of valerian that I eat without teeth. It's almost kitten-hood again though there's still a bit of Alpha in me. I fought a cat off our territory before dawn this day. The Alpha-Fee woke up, called me in and fed me. I'm her good boy.

Winter's ending soon but I think I'll stay. I still have a sickness in me but I harm no other cat and I'm mostly calm and I can purr again. And that's Purradise! When you can find a lap and purr, and purr, and purr.

Homework was to: Think of anidyllic, perfect time in one's life and write to the idea of Paradise Lost. {How or why that perfect time ended]

I have always enjoyed writing and concocting stories and poems and I would like to thank my mother for singing to me when I was young and showing me that it was natural to write things down. Telling impromptu stories to my kids when they were young was also fun.

I knew you were not mortal

There's a place back in my childhood
We were always passing through.
Nice town for a stop off,
(

What is the long view?

What is the trend?

Is what we’re hearing false or true,

Th’advice and dictates on which lives may depend

(Where all ‘failings’ trace back to

Homework to write a piece where two words inspire fear!

Belas was taking a nap. It was midday and the sun was hot. He and his kinsfolk had worked without rest since the first ray of sun had lit the altar stake. This stood close to three large fallen oaks that had come down in the fierce

Lady of the Dance

Sister of the sun and rain
Bring the dance to earth again
Gentle spirit, fair and free,
Lady of The Dance is she.

Rhythms for a Broken World

Hear the heartbeat of the world

resounding in the Shaman’s drum.

New religion cannot save us.

Call the ancestors to come!

Children have the clearer view.

Broken is the gift we

Rhythms for a Broken World

Hear the heartbeat of the world

resounding in the Shaman’s drum.

New religion cannot save us.

Call the ancestors to come!

Shortly before five o'clock, the water reached the end of the garden.

'Are you worried, Cai? It's come up so suddenly,' asked Georgina.

'Not unduly, they must have closed the Burnham Barrier early.'

A five inch penknife;
So much a part of him.
The whole curve of it
fitted my